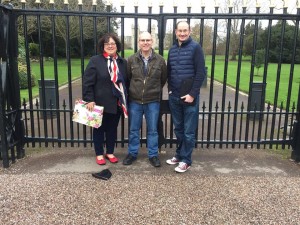 This week I found myself outside Windsor Castle with Laura Griffis from Bethel Church Redding and Steve Clarke from Children Changing Nations Praying that children will have access to the royal places in the UK including Windsor Castle.
This is the story of how it came about and what happened while we were there.
Last October my wife Janet and I travelled to Bethel Church Redding in California to attend the Open Heavens Conference and to spend some time with Laura. We travelled to Redding via Vancouver were we took the opportunity to have a meal with some friends – Andy and Dani. During the meal we noticed they had some keys tattooed on their arms. Andy told us that they met the keeper of the keys on a tour of Windsor Castle. He took them up onto a cannon tower to pray and then gave a few of the old keys away as gifts. Andy and Dani were given a key which they were told signified longevity and legacy. For them it is a reminder that all doors can be opened and all things are possible.
When hey spoke about the keys it immediately reminded me that our Children Changing Nations team had (3 years earlier) leant on the wall of Windsor Castle and prayed for the royal family and that children would have open doors to royal places. I had not thought about this again until seeing the key tattoos in Vancouver! So we travelled to Bethel feeling that there was something significant about Windsor Castle. 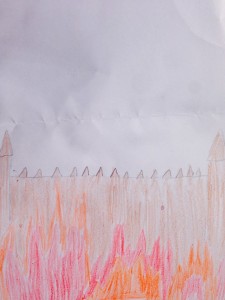 At one of the conference meetings we were told that children at the Bethel school had produced prophetic art for people attending the conference and I received a picture of a castle with flames. I knew immediately that this represented Windsor Castle!! (Yes I was quite overcome when I opened it!). It also transpired that this was drawn by the only UK pupil in the class!
So on Monday 26th January we visited Windsor to pray and start planning a potential CCN mission to Windsor. Instead of going back to the section of wall we prayed at before we felt Holy Spirit lead us in a different direction and we ended up at the gates at the end of The Long Walk where we prayed that children would have access to royal places and that doors would be open!
 When we had finished we decided to take a selfie to record the moment. We were then approached by a gentlemen who offered to take a photograph for us.Having taken the picture Steve asked him if he lived locally and he said he lived at the castle. We all smiled unconvincingly but he reiterated that he lived in a house in the castle wall and told us that he was a Military Knight of Windsor. He then went on his way.
We thought this to be a significant encounter and a sign that God has his hands on our plans, – it’s not every day you have your photograph taken by a knight!!
When we got home Laura and I busily started to google Military Knights of Windsor. And this is what we discovered.
The Military Knights of Windsor are retired military officers who provide support for the Order of the Garter and for the services of St. George’s Chapel, Windsor Castle. They are the oldest military establishment in the Army List. Formed by King Edward III.
Known as the Alms Knights, they formed part of the College of St George which was created to support the establishment of the Most Honourable and Noble Order of the Garter. 26 ‘Poor Knights’, mirroring the 26 Garter Knights, were given accommodation in the Lower Ward of Windsor Castle in exchange for daily prayer in St George’s Chapel for, and on behalf of, the Monarch and the Garter Knights.
The Knights’ homes in the Lower Ward of the Castle are theirs for as long as they can carry out their duties, and in most cases, this takes them to the end of their days.
So what does that mean for us? Well it’s amazing to think there is an unbroken line of these knights going back to1348 when Edward 111 established the order of the Garter and that part of their duty is to pray daily for our Monarch. – (Perhaps the key representing longevity?)
Also we discovered that Edward 111 is buried in the Edward the Confessor Chapel at Westminster Abbey where we first started Operation London (Perhaps The the key representing open doors?)

Let’s see what doors are going to open!