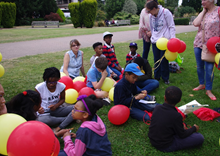 We had a great time walking around Croydon, praying and creatively declaring God’s heart for Croydon and blessing people.

We took groups of children with their leaders from churches in Croydon and gave them the opportunity to pray and creatively declare God’s heart for Croydon. The day started with a time of worship and preparation for the day. The children and their leaders then walked around Croydon carrying out specific “missions” that released them to share the hope of Heaven; bringing love, joy, peace and justice with them wherever they went.

Before you read on this report is so much better in the PDF colour version: HERE

As children and their leaders arrived, we blew up balloons, at least 65 of them! As it was the Croydon festival, we thought it would be great to give away balloons to children.   When everyone had arrived, we had a time of worship which included a time to hear from God. Some of the children heard God for the first time and they received amazing words about their identity in Christ.

It was then time to prepare for outreach. We had news declarations to write, boost bars to give stallholders to prepare and key love messages to make.

Children were asked to write encouraging messages for the market stall holders to show them that they are appreciated and valued.

The messages and chocolate bars were gladly received and it was a good opportunity to spread joy and encouragement among valued members of the Croydon community.

The children thought about their hopes and dreams for Croydon. They discussed what they thought God would want the headlines to say.   Some more included: ‘God culture not gang culture!’  ‘All people healed!’

Before leaving for the outreach mission, the children wrote love messages that they received from Jesus to give to people.  These included:  ‘You are fearfully and wonderfully made’ ‘God loves you’  ‘I know the plans I have for you’

We left the church after lunch, each child equipped with a bag filled with their boost bars, key messages of love, bookmarks for children, notebooks  for their treasure hunt, their headline news and of course a bottle of water for their journey. We also each had a bottle of bubbles that we used as a symbol of spreading joy in Croydon.

We then walked to the Town Hall and grouped together and prayed for the staff, councillors and decision makers in Croydon. We prayed for wisdom in the decisions that were to be made in Croydon.

Next, we walked to Queens gardens where we went Treasure hunting. The majority of the children and adults with us were doing this for the first time and were very excited.  We spent some time asking and waiting on God for clues, names and descriptions of people and where they would be.

The children found treasure straight away they were amazed that the names    and descriptions that God had given them matched people that they met in the gardens. The children were greatly encouraged and it was such a joy to see them step out with such Godly confidence.

Our next stop was the library we stood outside Croydon Cenotaph and declared peace and joy.

Our final part of the journey was to walk along North end street, a busy high street in Croydon. The children gave out balloons, their keys of love messages and bookmarks to children, so many children received a bookmark with a bible verse. The parents were so pleased and receptive.

We stood outside the entrance to the Whitgift centre and Centrale centre and blew more bubbles, declaring peace and joy.

It was then time to go home. The children had given out all the balloons, their keys of love messages and bookmarks.