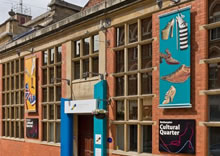 What do your shoes say about you?  The colour and style, in some cases, match the owners character. We asked Father God to give us some messages and drew them inside shoe outlines, or drew shoes that matched the message.  Some were boots, speaking about managing in the tough times, and others had jewels on them – suggesting people were precious to God.  A memorable one was by a six year old girl (who had fortunately sneaked in), her’s was of a very posh shoe.  Around it she wrote, “Today is your special day, but God says he loves you everyday.”

So with drawings in hand we set off to the Shoe Museum anticipating who Father God should have us meet.  Some children have descriptions of the people in the museum so they knew they had the right person.  When we arrived most of the children quickly found their person and handed out their shoes and a few prayed with the people they met.  The girl with the posh shoe picture couldn’t find her person, despite us suggesting some people with very nice shoes on!  She drew some more pictures and handed them out, but her posh shoes person never arrived.

It was time to head back, we had a quick treasure hunt in the market and handed out medals to people getting ready for London.  One of the street traders was great praying with the children.  A war veteran also received a very specific message about God’s love even through the tough history he has had he wore his plastic medal with pride.

So we set off back, the posh shoe picture still in hand, and a team of leaders disappointed this picture had not be given away.  Just as a few leaders commented that she would have to take the picture home, the girl spotted a bride outside a pub.  She knew immediately it was her.  So she went over and gave the picture to the bride – a tear formed in her eye and she gave the girl a big hug.  How great is that?  That on your wedding day God speaks into your life!  We imagine the bride still has her picture.