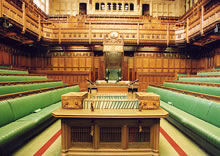 So this was the week Children Changed a Nation!  Thank you everyone who prayed- we had an incredible day on Tuesday.   I am going to tell the story over a few posts- so tune in over the next few days to hear all about it!Six groups of children came from Horsham, Leicester, Northampton, Oxford, Winchester and Salisbury and met by the visitors entrance to the Houses of Parliament, or the Royal Palace of Westminster as is it’s proper title! When the initial strains of travelling across London had passed we were full of anticipation as we prepared to walk the corridors of power in our nation and release Heaven’s goodness, Hope and Love in that place.Our group had real favour with our guide, who was really respectful of what we were there to do.  He gave us opportunities to pray and say our declarations in each appropriate room, and was visibly moved on a couple of occasions.  It was a real contrast to the demonstrations against Youth Cuts that happened the same day, later that afternoon.  Children coming to the seat of Government with Honour to encourage, support and under gird with prayer rather than foster anger and disaffection.  the presence of God came, and doing the tour gave us insight which the Spirit used to prompt us to pray for other things that have been contributing to the spiritual atmosphere in this country.One of the things that I learnt was that the colour carpet/ furnishings in the Houses of Parliament tells you something about who uses that area.  Green carpet is for the commons, Red for Lords and Royal blue for Royalty.  Wherever the Queen treads is carpeted with Royal blue, the same colour as the Operation London back packs.  Temporary carpets in Royal blue are rolled out ahead of her. In her Robing Room, where we spoke out our first declarations, the pattern in the carpet was a shade of gold much like the yellow/orange in our OL logo on the bags.  It was a powerful reminder to our kids right at the beginning of the day that they have Royal Identity- where they tread is Heavenly ground!  What an amazing and encouraging start!

So, we walked the corridors of power and decision, we left a trail of God’s Glory- His love, hope and blessing and when we were done with our tour we went into one of the smaller meeting rooms situated off the ‘Great Hall’ and had the incredible privilege to meet with one of our Members of Parliament who took some time to talk to the kids about how his faith helps him in his job.  We then prayed for him and prophesied over his life and work.  The children prayed some powerful prayers and one of them prayed out what was in his prophetic card (which I knew because he had been on my list of MPs, but that child wouldn’t have known what was written in that card!)  which was an amazing confirmation to me that the children were hearing accurately God’s messages for our nations leaders.  After praying we took some time to worship, right there in the Houses of Parliament. As the children lifted their hearts and voices to God, He came and met with us, His very presence right there in Westminster.  We also had some more time to pray and speak out God’s promises over the United Kingdom.

We had spoken to the children about how they can make a difference and shift or change atmospheres, bringing hope and joy where there is none.  We saw a very physical and tangible picture of this in what happened next. We left the Houses of Parliament and stood outside it with our little bottles of bubbles. We stood in a line and blew bubbles out across the crowded streets and into the city.  The bubbles were a representation of God releasing Joy to our nation.  It was amazing!  As the children blew the bubbles, people stood and had their photos taken with us, they stopped to watch and smiled delighted smiles!  Many tried to catch the bubbles, joy spreading in the natural across the faces of the crowds as joy was released in the heart of our nation in the supernatural.  It was a time that I will always remember!

After the children had blown their bubbles and released joy to the city of London, we walked over Westminster Bridge, blowing bubbles from time to time until we got to McDonald’s for lunch.  We had a fun lunch together with our excited children.  After lunch we walked back across the river towards Downing Street, the official residence of our Prime Minister.  On the way, we stopped in a park to pray: one of the children felt led to lead us in praying for the homeless and destitute in the city and the park was a perfect place to do it.  We prayed and blew more bubbles which the wind caught and took into a bus depot- just the kind of place rough sleepers use to get away from the harsh weather.  It was another powerful moment.  We continued along to Downing Street, via the exciting distractions of the changing of the guards at Horse guards parade.  Downing Street itself is heavily protected.  The street in gated and barred and heavily guarded.  Once again we stood and prayed, letting the bubbles float down the street, reaching places we couldn’t go- on this occasion- paving the way for the next trip!

By this time, we really were in the final leg of our trip.  The kids were amazing- we had done so much walking and the expectations on them were high, but they rose to the challenge with real character.  If you walk through Horse Guards then you come out into St. James’s Park.  Just along the lawn there is a spot where you can stand right next to the wall of the back garden of Number 10 Downing street.  If you get THAT close then the man with the gun gets a bit fidgety, but we got really close and it was here that we brought our days activity to a close.  One of the girls had felt stirred up to do some kind of prophetic dancing in the park.  What was in her mind to do was to ‘Rejoice’.  In the Hebrew the word rejoice means to jump and twirl- an act of celebration.  It was a great way to be thankful for what God had done and so we all stood there, next to the Prime Minister’s garden and rejoiced in the Lord!  As we went on to pray prayers of thanks and blessing, three girls broke off and began to sing the worship song ‘rain down’.  As they had started to sing and dance it began to rain, at first a little (it had been bright sunshine all day) and then the Heavens Opened and huge fat drops of water poured out of the skies!  We all said goodbye to the other groups as we gathered up our things, laughing in wonder at the sudden change of weather!  Coats were donned and backpacks scooped up, but by the time we were under cover, less than 2 minutes later, we were soaked to the skin!  It felt very much like another picture in the natural of God’s actions in the supernatural.  He poured himself out on London that day!  As we left, the Horsham group stayed huddled under a tree in St. James’s.  From this vantage point they were able to photograph the double rainbow that filled the sky about Westminster, and made the BBC National News!  A sign and reminder that God keeps His promises.  The covenantal seal of a Good Daddy.  And so ended our first trip as Children Changing Nations.  An incredible beginning and even more exciting for those who know that the best is yet to come!