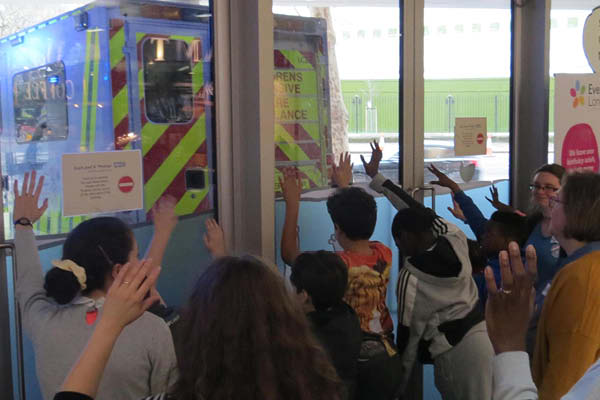 Our first stop of the day was at St Thomas’ Hospital. A very excited and expectant group of children and their leaders met members of the Chaplaincy Team in the Hospital Chapel. It was great to see friendly faces again and to develop the relationship that CCN have with the team there.

We had an opportunity to pray and make declarations. We visited the lowest point of the hospital (the Ambulance Centre) to speak out declarations of God’s love, peace and hope. The team also took us to the highest point of the Evelina Centre (Children’s Hospital) to do the same here.

The chaplains from St Thomas’ took us to the Evelina Children’s Hospital. We began by praying over the ambulance bay – we prayed for those going out in the ambulances, the nurses and doctors who accompanied the ambulance drivers and for the families and children travelling to the hospital that they would feel safe.

We travelled up in the lift to the very top of the Evelina, although we could not enter the wards we could see in through the windows on each floor. We stretched out our hands and prayed for the families we could see through each window. We shouted out words we believed God was speaking over them, “peace”, “hope”, “healing”, “life”.

As we headed back to through the foyer of the hospital we stopped to sit on the chairs and prayed that the next people to sit in them would be full of hope and peace and that Father God would take away any fear and worry from them.

In the Chapel, we spent time praying in the pews for people that were to visit and sit in these places – sick patients, family members, staff and members of the community. One NHS lady came into the chapel who seemed troubled and tired. Two girls had words for her separately and went to share their messages and to pray for her. How amazing when she revealed that their messages were the same! ‘God hears your cry and will provide’.

One child in our group had a name in mind when praying in the Chapel – Charlie Fletcher. She wrote a prayer for Charlie’s family and later on, saw that Charlie Fletcher was the name of a little boy that had sadly died and whose name was at the place of remembrance. The prayer for Charlie’s family was left for them to read when they next come to the chapel to remember.

As children prayed, they created ‘Heart Art’, showing their prayers and messages creatively. These were hung onto the tree that the Chaplains had set aside for us. It became a special feature in the Chapel.

Children lit candles as they prayed for the emotional highs and lows in the hospitals, the celebrations and the challenges. Worship music was played here and there was a tangible sense of God’s presence in this place.

Before we left, there was opportunity to lay hands on the Chaplains and to pray powerfully for God’s blessing, peace, hope and wisdom. The Chaplains were blessed, as were we all! Michael, one of the team, received cards of encouragement from the children and was thankful for all that he had experienced on our visit.

Another great day of God at work through children partnering with Him! And then onto our next stop…