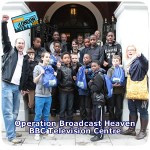 From beside the BBC newsroom that generates television, radio and Internet news to 230 million people a day, another group of children prayed for the organisation’s decision-makers and for God to be glorified through media broadcasts. After a tour of the studios, they declared God’s rule and reign over the airwaves.

In the BBC studio we used a blue cloth to make me invisible.  You could only see my head! Lord, bring prosperity to the BBC and bring peace to those watching and working.

Today we had the very bid opportunity of trying to change the lives of many.  There were no problems today so going to the BBC was great.  We went to many different rooms.  Trying to make the world a better place.