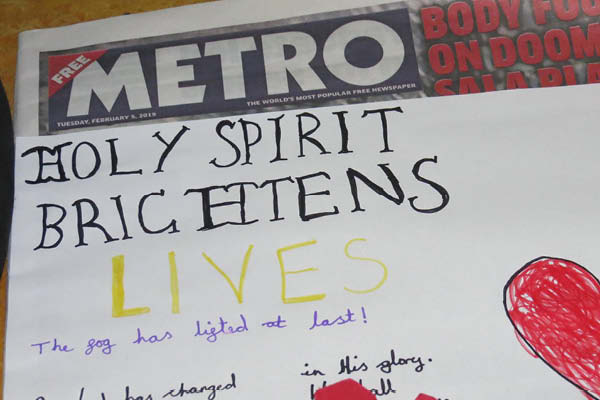 It was an honour to take some of our children to the Love London 2019 event.

Once again it was great to receive a warm welcome from the staff at the Abbey Community Centre in Westminster which is proving to be such a valuable find for us a gathering place. It was fantastic to join together with other groups to worship and bring the day before God and exciting to see new faces anticipating the day ahead.

The first stop was to the green opposite the Palace of Westminster to hold up newspapers with headlines declaring what we would like to see in our nation. It’s become a landmark spot with many news reports currently being broadcast from there so good to fill the space with some Kingdom headlines.

Next, it was over Westminster Bridge to St Thomas’ Hospital. Our relationship with the hospital chaplaincy staff helped to make our visit smooth and memorable. I always find it amazing that some of our children find praying in the chapel and in the children’s hospital one of their highlights. If only we could get into the wards to interact with the children!

Back over Westminster Bridge among the tourists there was time to stop and blow bubbles representing God’s presence – it always feels like an opportunity to release God’s Joy.

Then it was on to Westminster Abbey to worship and pray at the chapel of Edward the Confessor. We seem to have incredible favour every time we go, sometimes I just have to stop to take it all in. What an honour and privilege to stand with a group of children and pray for our nation in such an iconic place, on this occasion accompanied by the abbey choir as they rehearsed for evensong. It was great to hear our host remind us that we were continuing in a line of pilgrimage to the abbey over hundreds of years. As I left the chapel I again was aware of the tangible sense of God’s presence just as I remembered it from our very first visit when CCN was launched.

Our day finished in the city at the Sky Garden where we gathered at the four corners of the garden and prayed over London as we viewed it from up high.

Virtue: Westminster Abbey – It was seeing the angels dancing & singing

Caitlin: I felt God’s presence the most in the hospital’s chapel and the shrine.

Mofe: It was Sky Garden – I enjoyed releasing God in all four corners to love London and make London better.

Robbie: The Sky Garden view – to bless the buildings and release Joy bubbles.

Rafael: I had two highlights: Sky Garden, and I really enjoyed releasing healing in the hospital, going up in the lift and pray for the ward.

Oliver: in the hospital chapel, especially the cloth corner, praying for mourning families and releasing happiness.

Samuel: My highlight was going into the shrine at Westminster Abbey. I felt special to go in there.

Noe: It was in the shrine because I saw lots of angels worshipping.

Steph: I really felt the peace in the Chapel and enjoyed releasing God’s presence. It was also a special moment to see the Good News the children had written on their newspapers headlines. And I really rejoiced in seeing our children engaging in worship.

Blandine: The whole day was a deep encounter with God. My highlights were to see the engagement of the children in worship, in prayer – they had fun but they were also very deliberate in prayer. And praying for the chaplaincy team at the hospital. Finally, God’s filled my heart with compassion for the children who don’t know Him yet when we prayed in the shrine in Westminster Abbey.