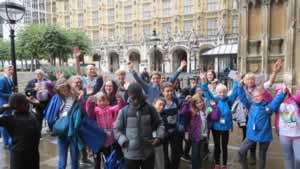 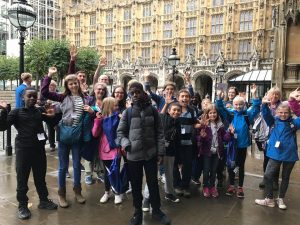 Half of our Love London team visited the Houses of Parliament – officially on an audio tour but with the purpose of releasing God’s presence wherever we put our feet. To that end, we stuck gold stars on our shoes as a reminder that God’s presence was with us as we walked through the chambers and corridors of government.

In the queens robbing room where the queen prepares to open parliament
we responded to what one of the children felt Holy Spirit was saying so we quietly stamped around the area we were standing to leave a deposit of His presence. Then in the House of Lords, we made a declaration that God’s presence would be in the house. In the Division Lobby where MPs make their voting intentions known we lined up to symbolically vote for God’s way to be chosen and we then proceeded to the House of Commons where we each took a moment to pray by the dispatch boxes.