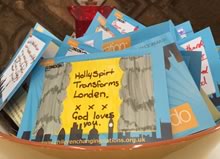 The planned ’90 Minutes for 90 Years’ Operation London 2016 prayer event for the Royal Family couldn’t take place, but the children of Horsham were not put off by that!  They set off on Father’s mission for them.

Part or the day was blowing bubbles at the Millennium Bridge, releasing joy!  The children also declared for our nation from the top of St Paul’s Cathedral.

Westminster Abbey was a main focus, writing prayers and declarations to leave and to pray for revival in Edward the Confessor Chapel.