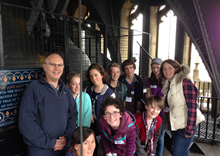 One Amazing day at Operation London 2014. With a small group of two leaders and eight children we had the privilege of visiting two of London’s Historic and most significant places.

First we had the opportunity to visit the palace of Westminster to make a series of declarations declaring God’s blessing and favour on our nation. We prayed that that God’s message of Hope and Good News would be proclaimed across our nation and that revival would come.  It was such an honour to be at the houses of parliament again (our second visit with operation London).  It was great to make the return visit to Westminster Hall and the central lobby including saying prayers at the main entrance door to Westminster hall.

We then made our way to the South Bank via Westminster bridge were we stopped to blow bubbles to represent God’s presence going out over the City.  We then walked to Lambeth Palace the London home of Justin Welby the Archbishop of Canterbury.  At the palace we were warmly greeted by Amy Wilson the Palace’s events and tours manager. Following a short film about the life and work of the Archbishop and his staff we made our way to the oldest part of the Palace – the crypt chapel said to be one of the best preserved medieval vaults in London. This is where the Archbishop and his team meet 3 times a day for prayers. Here we prayed for Archbishop Welby and then asked God for messages. We then wrote or drew them on Operation London Cards. We then asked God on what seats to leave their messages and placed them for the Archbishop and his team to find when next in the crypt, – what a unique opportunity! After this we had a tour of the palace garden, one of the largest private gardens in London.  When we arrived at the pond we made some declarations over the Church in the UK. We Thanked God the Church of England and the fact it has stood for the Christian faith over the centuries and we prayed for revival to come to the church in our nation. We then blew more bubbles! On our way out we were shown a gate that connects the palace garden to St Thomas’ Hospital (another operation London destination). This gate was used to access the garden by Florence Nightingale when she worked at the hospital.