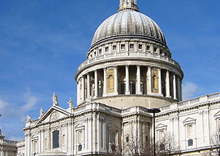 The day was structured around re-visiting two places where we had previously had significant times with teams from CCN – St Paul’s Cathedral and Westminster Abbey.

We started our day however on the millennium bridge to fulfil a longstanding vision to blow bubbles over the river Thames. Blowing bubbles is something we often do when on CCN missions as a physical symbol of carrying God’s Presence with us wherever we go. As we climbed the steps of the bridge we had our first unplanned appointment of the day with a group of Christian filmmakers. We asked if they would like the the children to pray for them which they gladly accepted. We then proceeded onto the bridge to blow bubbles releasing plenty of joy in the process.

We arrived at St Paul’s Cathedral and immediately climbed the 528 steps to the Golden Gallery above the dome. Here we blew bubbles over the city.  When we got back down to ground level the children took it turns to pray in the knave – (causing some interest to passing tourists).  Unknown to us, our visit coincided with an event held that evening in the Cathedral to celebrate the arrival of the Holy Spirit at Pentecost. So good to be preparing the ground!

After lunch we made our way to Westminster Abbey to pray for the royal family and the nation at the the shrine of Edward the Confessor. This was a significant moment as this was the same spot where we had our first prayer mission with CCN six years previously. The shrine is an iconic and important place right in the heart of the Abbey. It was a real honour to spend some time before God in a place of great history within the church and a place that represents the Christian inheritance for the royal family. Seeing the worn steps where worshippers have set foot over the centuries was a reminder of the great cloud of witnesses and the part that the children were playing in history. Aaron our host from the Abbey staff was superb and really engaged with us. He allowed the children to write prayers, and prophetic messages and leave them in the prayer bowl on the shrine. The sense of God’s presence with us was amazing and all the children said that they felt the Holy Spirit with them as they listened to God and prayed out for the Nation.

On the way to the station at the end of our day one of the children spotted a homeless man and suggested we could pray for him. The gentleman enthusiastically agreed and so the the children prayed and prophesied right there on the street.

It was such a privilege to spend time with the the children on that day and see them stepping up and praying and declaring favour and blessing over our nation, hearing God and speaking out their prayers