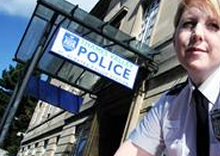 Our team of 16 children plus their leaders headed out into Oxford excited about all that God was going to do! On the way to the police station we passed Christ Church Gardens and spent some time in the grounds giving out blessings to members of the public. We had graduation certificates to hand out as a scroll with messages for individuals, showing that people are significant and special to God. We had some great conversations with the public and it was brilliant to be able to bless others and to share God’s love!

We next stopped at the Oxford Law Court. As it was a Saturday the courts were closed, however we stood at the main entrance and blew bubbles towards the building as a sign of God’s presence on the building, the staff who worked there, the work that is done and the people who are in court each week with a range of difficult circumstances. We had some prayer requests given to us when members of the CCN team met staff at the courts before the mission day. The children wrote on the Children Changing Nations post cards with messages from God and posted these through the doors. The messages reflected God’s love, healing power and how He can break through all situations – however hopeless they appear! We wondered what the staff would think about the postcards when they opened up the courts on Monday morning!

Next onto the police station in Oxford across from the court. We met Gordon who was the Police Sargent (and a new Christian) who was really excited to be part of the CCN day. We had a tour around the station – an interesting set up dealing with many challenging situations. We spent time at the station hearing about the work that goes on and being told stories of how officers run, jump fences and catch suspected criminals! We also heard about the things that the officers do to support people and the community and work with offenders to make a difference. A very big job!

On our visit we had a great opportunity to pray at the station for the issues that we had heard about. We made a long paper chain with our prayers recorded on the chain links believing that God can break in and make a change. We broke the chain as we spoke our prayers out. We had an amazing opportunity to pray for Gordon. What a privilege to stand around him and experience powerful prayers spoken out for him, his work, his witness in the station sharing God’s love and presence.

We left the station knowing that we had made a difference partnering with God!We know that our prayers had made an impact on Gordon and also on the unseen.