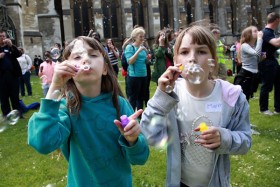 The grounds in front of Westminster Abbey were the location for our Holy Spirit Flash-Mob. Having spread ourselves around the green, on a signal we immediately formed a large circle and blew bubbles for all we were worth! The bubbles representing The Holy Spirit carried over the railings and into Parliament Square where they became framed against the backdrop of the flags of many nations. The impact was immediate bringing a smile to the many onlookers. It reminded me of our very first first visit to the Abbey with CCN when we stood in the Edward the Confessor chapel and formed up in a circle to pray for the nation and felt so aware of God’s Presence with us.

After blowing bubbles we came together and shouted out the declaration – “Let your Kingdom come in our Nation, on Earth as it is in Heaven.” As we cheered joyfully to finish it felt like all of heaven was cheering with us. As well as being great fun it felt that in that moment we done something significant in God’s Kingdom.