In the grounds of Westminster Abbey the children were given keys with tags attached. One of the leaders explained, “We want you to encourage the person you’re going to give your key to. Who God says they are is the key to unlocking their heart. So ask God what He wants to say, and write it down on your tag.” They also prayed about whom to give their keys to, then handed them out to surprised tourists and passersby.

The final mission included a guided tour around Westminster’s shrine of St Edward the Confessor, who built the original abbey. Public access is restricted there but the children were warmly welcomed. They prayed for the Queen and declared the positive and influential role the church has in the nation. 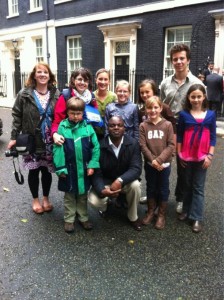 At 10 Downing Street a small delegation handed over a petition about the e-Safety campaign which seeks to protect children from inappropriate Internet content. They were rewarded with an unexpected meeting with Shaun Bailey, special adviser to the Prime Minister on youth issues, and were able to pray for him.

On their way past the Houses of Parliament, the group inadvertently ran into Brad Hawkes from New Generation – an organisation equipping youth for creative outreach in schools, and Clive Ireson from the Association of Christian Teachers. There on the pavement, all three organisations were prayed for.