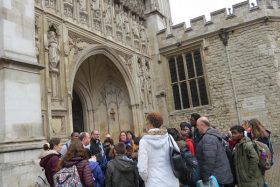 We had the privilege again to visit Westminster Abbey, the birthplace of the Church of England.

We were shown around on a day when they had closed the doors to the general public so that the choir could rehearse for evensong later that day, this set an amazing background of worship. We paused for a moment at the Coronation Chair, where Kings and Queens have been coronated for nearly 1000 years, and the most poignant moment during the coronation is where the Monarch is anointed with oil, again an amazing sign that Holy Spirit is in everything we do.

We went to the tomb of Edward The Confessor, who initiated the vision for the Abbey, and the begging of the Church of England. Here we were able to worship, almost alongside the choir, and pray and declare an open Heaven in that place. We saw Angels around us and felt Gods presence in that amazing place.

We have been a part of history, a living church, and we joined with the realms of Heaven in our mission to Westminster Abbey.